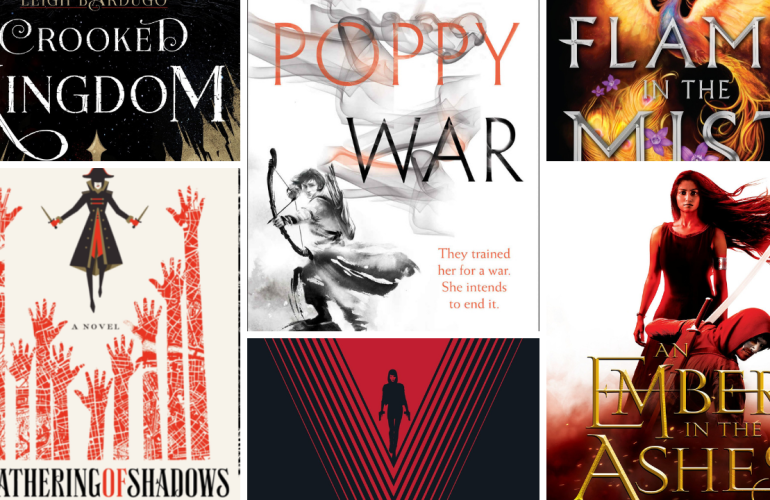 In celebration of the trailer drop for the final season, I thought I would do the Game of Thrones Book Tag. I found this tag on The Book Nut so be sure to go over there and give them some love!

Although I have not read the books, (I know I know, reader faux pas) I am OBSESSED with the TV series and my heart is breaking over soon-coming finale. What will fill the void of my Sunday night sing-a-longs to the intro music????

Arya Stark | A Character That’s All About Revenge

For some reason I had a hard time choosing a book for this category. I’m going to go with An Ember In The Ashes series by Sabaa Tahir. This is one of my all-time favorite fantasy series. There’s a ton of sneaky political moves mixed with some amazing characters and jaw-dropping twists. 100% recommend to anyone who loves fantasy.

Joffrey | A Villain You Just Love To Hate

I definitely have to go with Marcella from V.E. Schwab’s Vengeful. I enjoyed reading the first book in this series, Vicious, but Vengeful blew. me. away. Her character is just fucking perfection (she may be a villain I love to love rather than hate, but… semantics.) The timeline: genius. The writing: beautiful. Oh, man I’m getting worked up just thinking about how much I love this book. (Please note: if you did not love Vicious, please give Vengeful a try. It is so so worth it.)

As I am trash for YA contemporary, I have a bajillion books that work for this category. I think it’s only fitting that I go with my all-time favorite book which is I’ll Give You the Sun by Jandy Nelson. There are so many good things I can say about this book, but I’ll do my best to keep it short. It’s a dual perspective involving twins and multiple time periods, the writing is GORGEOUS, and the story is heartbreaking in the best way possible.

Jaime & Cersei | A Ship You Just Can’t Get Behind

I very rarely am the unpopular opinion when it comes to shipping book characters. I literally can’t even remember a time when I disagreed with a book’s ship. I think I’m usually just happy when the mc is happy (who knows?) OH! I have it. I’m going to go with Evie and Jericho from The Diviners series by Libba Bray. Okay, so I don’t hate this ship. It’s just kind of meh to me. I feel like Sam is so much more fun and a better pairing (possibly?) I guess they never officially get together so it’ not necessarily a ship, but I have a feeling that’s where this story is headed.

I’m currently reading The Poppy War by R.F. Kuang, and I am LOVING Rin’s mentor Jiang. He’s so freaking weird, but secretly powerful af. That is how I aspire to be in my old age. An eccentric old lady who can totally kick ass if I have to.

I think I’ve read literally two books involving dragons EVER? Unless there’s something from my childhood I just can’t remember. I’m going to have to go with Harry Potter and the Goblet of Fire by J.K. Rowling. This isn’t my favorite hp book, but I do love the tournament scenes and the dragon challenge is freaking TENSE. I’ve heard a million people talking about The Priory of the Orange Tree by Samantha Shannon which also involves dragons, so hopefully I will turn that two books into three very soon.

Sansa Stark | A Character You Grew To Love

I think I’m going to go with Manon from The Throne of Glass series by Sarah J Maas. (Chaol from this series is a close runner up) When Manon was first introduced in this series, I literally hated reading the chapters from her perspective. She was evil, but not in a fun way? I don’t know. But eventually I grew to love her and she became one of my favorite characters from the whole series. Like, I went from dreading reading her point of view to craving it. Kudos to you, SJM, for getting me to love a character I straight up loathed for a good portion (if not all) of Heir of Fire.

The first magic system that comes to mind is the Shades of Magic series by V.E. Schwab (honorable mention to Leigh Bardugo’s Shadow and Bone Trilogy) I’m obsessed with books using elemental magic, and I think she did a fantastic job at making it her own with these books. I love London, multidimensional stories and unlikely friendships, which is all very present in these books.

Tyrion | A Character Whose Weapon Is Their Mind

OHH! It took me a minute to come up with an answer for this prompt, but I think a perfect match is Mariko from Flame in the Mist by Renee Ahdieh. She uses her brains to disguise herself as a boy to infiltrate a rebel camp she believed tried to kill her. From there she only showcases her genius more (I don’t want to give away any spoilers, but she smart.)