I am a series lover. Ever since I was a kid, I’ve loved reading series (especially fantasies). There’s just something magical about packaging stories into their individual books while still carrying an overall plot between books. Believe me, that is no easy feat (especially when you’re writing seven different books—I see you, J.K. Rowling).

As I’ve read my fair share of series throughout my life, I have quite the collection of favorites. There have been a few that I did not love, but we’ll just forget those ones for today.

All these stories come with rich plots, novel ideas, and beautifully written characters. Yes, some of them have their downfalls, but overall, they’ve contributed something important to my life. Just to be clear, I’m only including series that I’ve read at least three books of.

I want to say a quick shout out to all the authors out there who’ve written a series. That shit ain’t easy and I respect you and all that hard work you’ve put into your books.

Well. If you want to see my all-time favorite series, read on below. 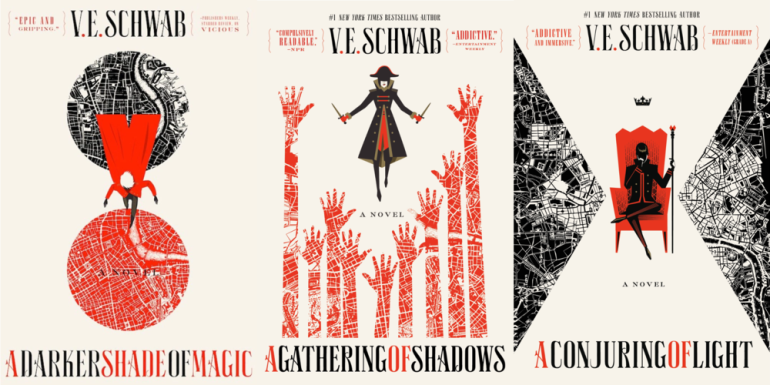 I am so happy this was my first taste of V.E. Schwab’s writing. This story. These characters. It is so hard to say you don’t love this series. (and, to be honest, I don’t know if I would trust you if you didn’t love them).

Every character brings something so pivotal to the story. The world building is literally out of this world. It is so rich and descriptive, it’s too easy to get lost in these Londons.

The magic system is so innovative and easy to follow. I never felt confused by the rules of this world (or worlds).

I will say my favorite book of the bunch is the second. I really don’t want to give away any spoilers, though so I will not say why.

If you’re a fan of elemental magic, London, and strong female characters, I think this series is for you.

I am so obsessed with this science fiction series. It is just SO GOOD! It’s much darker and grittier than you would expect from a young adult series (and that’s why I love it so much).

All of the characters have so much sass and sarcasm dripping from every word they say. It’s probably the main driving factor behind my love for this series. That and the epic writing, visuals, plot, etc.

I’ve read a fair share of books with interesting or different formats, but I think this series takes the cake. It is just SO COOL! I’m usually a big fan of ebooks, but this series was meant to be read in physical books. (I’ve heard the audiobooks are just as amazing, so maybe I’ll give them a try my second go around).

Each book follows different characters all involved in a specific incident. I really don’t want to say too much about what these books are about, so I’m going to be extra vague.

Basically, if you like stuff in space, stories involving AI, badass teenagers, and creative reading formats, be sure to pick this series up.

I’m going to be completely honest. I really hate the covers of these books. They’ve changed so many times and somehow get worse every time(???)

Despite my problem with the covers, it’s what’s inside that counts, right? Luckily, the story hidden beneath these covers is so delicious I can forgive them.

This series follows a group of teens living in New York in the 1920s. Some of them have special powers making them “diviners”. You get to follow them as they figure out more about what their powers are, how they got them, and what they’re supposed to do with them.

It’s very spooky, full of demons, ghosts, and who knows what.

If you like anything involving the paranormal, exceptionally researched 1920s history and slang, and some very complicated characters, give this series a go. Be warned! It is unfinished so you will have to wait a bit for the final book in the series.

I love the characters in these books so much. The magic. The adventure. The romance. There are so many good attributes to this series.

There are so many twists and turns in this series it’s hard to count. Just when you think you know what’s going on, Bardugo will flip the switch and you’re lost again.

This is another series that I think is better going in blind.

Made for those who love magical stories involving lavish palaces, betrayal, deceit, and confusing terminology.

Oh, my babies! These little stories may be short, but they sure do pack a punch and a half.

I don’t know how she does it, but McGuire packs in such descriptive and rich stories in just a few pages. The stories stick with you and truly leave a lasting impression.

There is such good representation in these books. None of it feels fake or contrived. Just right.

I know I always say you shouldn’t know too much about certain books before reading, but for real I’m going to tell you nothing.

Everyone should read these.

An Ember In The Ashes | Sabaa Tahir

This is probably my current favorite fantasy series. It definitely feels the most intense of all the ones I’ve read. The characters are so complex. They feel so so real.

The storyline is full of twists and turns. I can be elated one chapter and ready to punch a hole in the wall out of frustration the next. This is a true roller coaster of emotions

The character development in this series is so crazy well done. They grow as people/warriors/friends right before your eyes.

If you’re a fan of complicated relationships, epic adventures, and getting your heart ripped out of your chest, give this series a chance. (Right now).

I am so in love with these characters. Their relationships are complicated and real and I want them all to be my friends.

This series is spooky, magical, and full of mystery. Each book takes you on its own journey and cracks open the overall story a little bit wider.

I seriously don’t know how Stiefvater did it. All of the books have their own focus, but they all build on top of each other seamlessly to end in the most epic of finales.

You should read this series if you love tarot cards, Welsh kings, and the most precious of friendships.

This is the dystopian series that really got me into reading. I reread them recently, and they definitely have their problems (many of them) but I love them yet.

The imagination that went into building this world and storyline is just so so amazing.

I will say, I’m not the biggest fan of the characters. They can be frustrating and annoying and make the biggest of mistakes. This story is completely driven by the amazing worldbuilding and plot for me.

This series is based in a post-apocalyptic world where teenagers are “uglies” until they turn sixteen when they get an operation to turn them “pretty.” Our main character, Tally, gets herself into some trouble and her dream of turning pretty gets derailed.

Read this series if you love a good young adult dystopian series filled with adventure, cool gadgets, and betrayal. 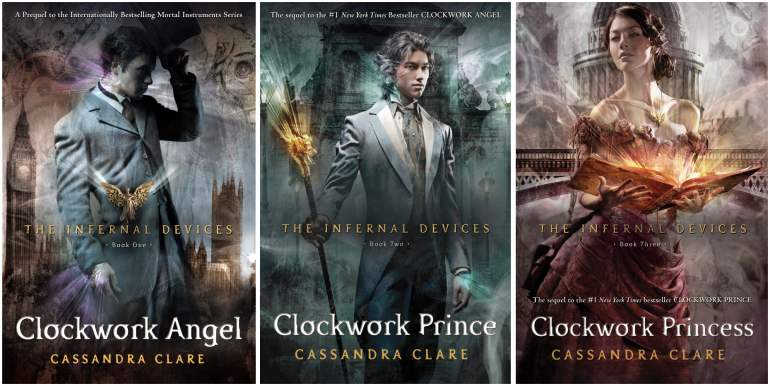 Omg these characters, though. My precious little babies! I read The Mortal Instruments and thought they were okay. I was truly skeptical whether this trilogy was going to live up to the hype.

This series is so mysterious and full of amazing surprises. The characters are so lovable you could get sick. The story is so atmospheric. Cassandra Clare’s description of their world is impeccable.

I love the setting. The mystery. The cameo’s from the characters in The Mortal Instruments.

Read this series if you’re a fan of steampunk, demon fighters, and the most heartbreaking of love stories.

Obviously, this was going to be no list of favorite series unless I included Harry Potter.

This series has made such a huge impact on my life as a reader, fangirl, person, etc.

Rowling is the queen of world building. There’s a reason every 11-year-old wishes they’ll receive a letter from Hogwarts in the mail.

I love these characters, the plot, the everything.

Everyone needs to read this series.

8 thoughts on “My Top 10 Favorite Series of All Time”